The Swiss chocolate industry in 2018

Less chocolate was eaten in Switzerland in 2018 than in the previous year. Despite the drop in per-capita consumption and the hot summer, the Swiss chocolate industry still managed to achieve positive overall results. Once again, the export business helped with this. However, political conditions are becoming an increasing challenge.

As in the previous year, domestically the Swiss chocolate industry again recorded negative results. This was compensated once more by exports. The growth in exports ensured that the sector turnover on balance rose by 1.0%.

Decline in per-capita consumption in Switzerland

The domestic consumption of Swiss-produced chocolate fell by 3.4%. The corresponding drop in sales was accompanied by a 4.8% fall in domestic turnover. The share of imported chocolate consumed domestically rose to 41%. The annual consumption per-capita in Switzerland fell by 200g to 10.3 kg. The negative trend on the domestic market was accompanied by a long and hot summer, and Christmas business which was relatively sluggish at first.

Exports once again generated pleasing results. The share of exports in the total production of the Swiss chocolate industry continued to rise in 2018 and now makes up 72.5%. The products exported abroad rose by 8.0% to 138,153 tonnes, and the turnover generated rose by 6.0% to 991 million Swiss Francs. With a 10% increase in sales and 7% in turnover, the growth in EU countries was greater than in non-EU countries. Growth in sales (+2%) was recorded in non-EU countries, although a decline in turnover was also noted (-9%). Considerable drops were recorded in particular countries in the Middle East and South-East Asia. However, countries like Australia, Brazil, China, Japan or Russia showed strong growth rates.

In view of the market trend, ensuring internationally-competitive conditions for Switzerland as a production location is increasingly important. The conditions are, however, under pressure. The main concerns on this point are the abolishment of reimbursements for customs duties as per the “Chocolate law” at the end of 2018, and the introduction of a minimum border protection for sugar at the start of 2019. The succeeding private solution to reimburse customs duties is burdened by a partial misappropriation of the milk allowance. The new minimum border protection for sugar will lead to extra costs of millions of Francs in the coming years. These politically-motivated cost factors make the competitiveness of Switzerland as a production location worse.

The trade agreement concluded in December with Indonesia expanded the important network of free trade agreements of Switzerland for the export-orientated chocolate industry. Nevertheless, the risk of eroding competitiveness must also be kept in mind when accessing export markets. For example, the free trade agreement between the EU and Japan that recently entered into force will lead to a gradual improvement in the position of chocolate producers from the EU compared to those from Switzerland in the coming years. In view of the much stronger export growth of competing chocolate nations like Belgium, Switzerland still faces challenges. 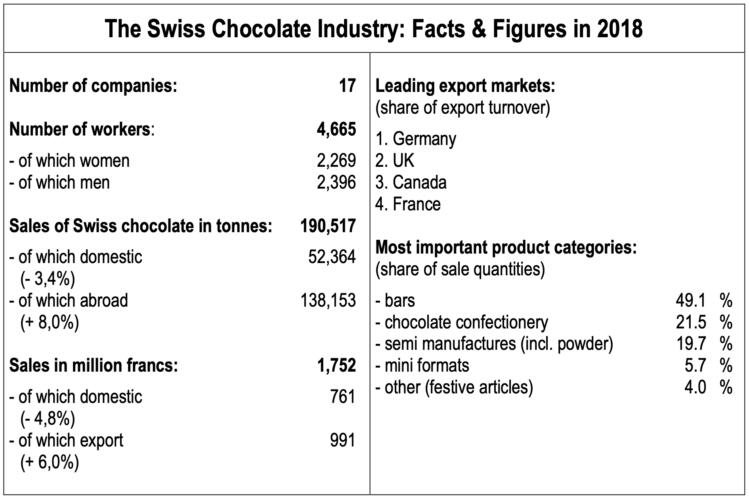